A 56-year-old male was brought to ER with sudden onset of headache, vomiting, and altered sensorium. He had no comorbidities.

On arrival, his neurological examination showed – he was drowsy with GCS E3V3M5(11/15) and was moving all limbs. His CT brain done elsewhere showed diffuse subarachnoid hemorrhage with intraventricular extension. He was admitted to ICU and managed with anticonvulsants, cerebral antihypertensives(nimodipine), steroids, PPIs, angioedema measures, and other supportive measures. He was noted to have a deranged renal function, which was optimized with corrective measures as per nephrologist advice.

He was investigated with a CT brain angiogram which did not reveal any aneurysm, he was planned for a DSA 4 vessel angiogram of the brain after optimization of renal functions, on which an aneurysm of the Left Superior Cerebellar Artery was noted. 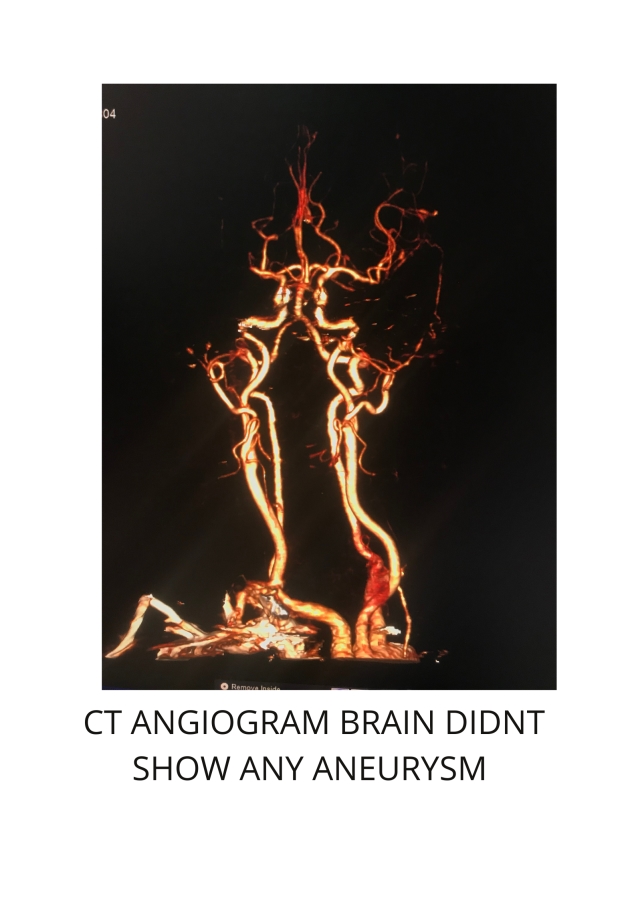 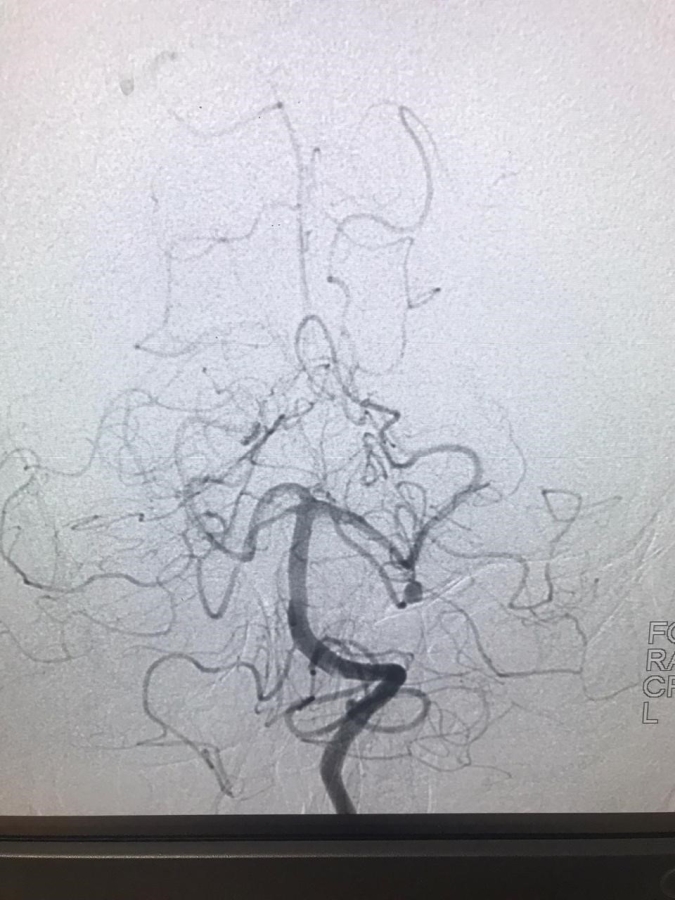 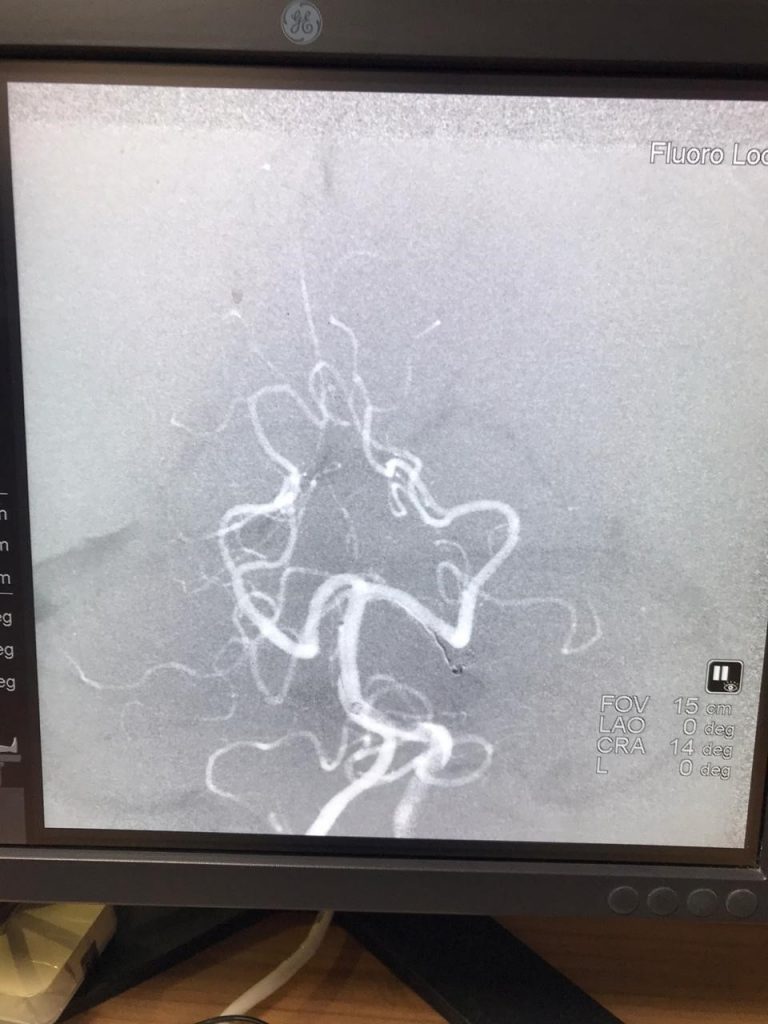 After post-procedure, he gradually recovered and at discharge, he was obeying simple commands, he needed a few weeks of neurorehabilitation and is now able to perform his activities of daily living with regular follow-up.

Aneurysms of the posterior circulation, including superior cerebellar artery (SCA) aneurysms, present unique technical challenges because they can only be accessed via maneuvering through deep operative corridors with limited working angles bound by critical neurovascular structures. 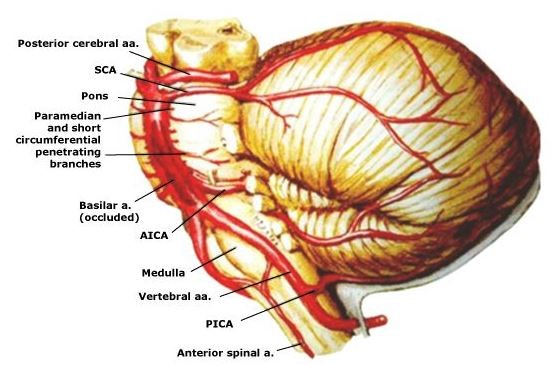 The posterior circulation is intimately involved with the brainstem and cranial nerves, and complications related to aneurysm treatment frequently result in clinically significant and often unfavorable consequences. The SCA supplies the main portions of the superior cerebellar hemisphere and the “roof” nuclei. 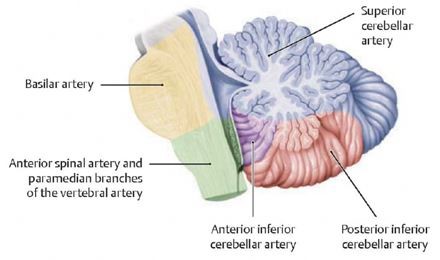 The most frequent location of intracranial aneurysms occur around the Circle Of Willis with the commonest being anterior communicating artery(ACom-35%), followed by the internal carotid artery [30%-including the carotid artery itself, the posterior communicating artery(PCom), and the ophthalmic artery], the middle cerebral artery (MCA-22%), and finally, the posterior circulation sites, most commonly the basilar artery tip. These are comparatively more amenable for surgical and endovascular treatments due to the skill of operating clinicians and familiarity with the anatomy developed by the frequency of performing these operations and the possible proximal control of these arteries.

SCA aneurysms are rare lesions with a reported incidence of 1-2% of all aneurysms. The majority of these aneurysms are located at the proximal aspect of the SCA, typically at the basilar junction. The aneurysm in the discussion being in the distal portion of SCA is not in this typical location making it an even rarer entity(~0.25-0.6%).

They typically present with subarachnoid hemorrhage; their close association to the cranial nerves (CNs) III and IV also result in an asymptomatic mass effect on these nerves. The reported 48-hour survival rates for patients presenting with hemorrhage from ruptured SCA aneurysms be only 32%, and the 30-day survival rate by 11%.

Surgical treatment of such aneurysms is technically challenging with a relatively high morbidity/mortality rate.  Given the anatomic course of the SCA, surgical approaches to this aneurysm were even more complex and there is often a limited opportunity to thoroughly dissect the neck of ruptured SCA aneurysms because of the restricted working space provided by a swollen brain after subarachnoid hemorrhage. In addition, a complete mobilization of the aneurysm, which is often required for circumspection of the neck, may not be safe as it can lead to premature rupture intraoperatively. The risk of injury to lower cranial nerves and venous sinuses, inability to obtain proximal control of arteries adds to the arduous task of safe dissection in narrow corridors even with larger craniotomy apart from the risks of blood loss and infections.

Distal aneurysms of SCA are difficult to treat not only surgically but also endovascularly because the microcatheters have to pass through the blood vessels of posterior circulation viz., a vertebrobasilar system which supplies life-sustaining and life regulating structures of the brainstem with many tiny perforators arising from vertebrobasilar trunk and their major branches with added inaccessibility to distal portions of the arteries due to the age-related tortuosity, atherosclerosis, smaller caliber of the distal vessel, maneuverability of microcatheters, probability of rupture during the procedure and other factors. Also, the occlusion of the aneurysm with detachable coils often results in coil protrusion. Parent artery occlusion is therefore frequently the preferred method.

With all these factors under perusal and due consideration, we could successfully place 3 detachable thrombogenic soft platinum coils in the fundus of the aneurysm. The patient recovered without much morbidity and is functional to perform his activities of daily living.

Significance of intellectual health in Politicians in a excessive-strain democracy like India
June 6, 2022